November 17, 2015
Deploying small web applications can take up more time than creating the application itself, for this reason I've put together this small guide to document how I go about deploying applications. I've used this method for things like small business sites, demo sites and application prototypes. Although we will go through a Python Flask application the same method would apply to other micro web apps.
The final running application will have a few moving parts, here is how it will handle two incoming requests: 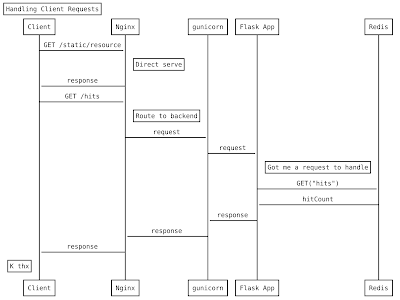 In this post we’ll create a small standalone flask application that uses redis for a cache. The same deployment method works for applications that require services like memcached, postgresql, etcd.

So first up we write and test the application locally. Our flask app is just one file - here on github. The application will just have two endpoints: /bump and /hits. We will skip the implementation details for now (see them on github) and jump straight to building a docker image ready for deployment. We will serve our app using the WSGI HTTP server gunicorn. In the Dockerfile we install the package requirements, copy over the Python files and bind to port 5001:

We build the docker image and test it locally. Here we just use a stock standard redis container from dockerhub, and use Docker’s linking mechanism to facilitate connecting the two containers. When we create these container links we can use specific names on the system (myapp-redis) but then internally expose them more generically as e.g. redis. This becomes very useful if we deploy multiple applications on a single server.
This image is available on docker hub as hardbyte/myapp-server.

Next we want to put a proxy server such as nginx in front of our application server, this will help protect our application from DDOS attacks by buffering slow clients. Do read through the deployment documentation for gunicorn yourself though!

Although here we are serving the static files as /static often this is switched around - we could easily have the backend at e.g., /api, and the website being served on root (/).
Now we’ve added hardbyte/myapp-nginx into the mix we have to link the nginx container to our application backend and finally we might want to serve traffic on port 80. Build or pull the docker image as before and start the container with:

Once we have the containers all working locally there are a few directions in which we can go for actually deploying the application. We don’t want to have to manually ssh into a server and run the docker commands. We want to make sure if the server restarts that so do all our docker containers. For this post we will assume just a single web server, however a future post will talk about deploying on a cluster.

Most modern linux operating systems now use systemd to handle running services. One such lightweight server operating system is CoreOS, it comes with a solid security model and predictable automated update behaviour. If you don’t have access to a machine with systemd it is very easy to spin up a coreos VM on your favourite cloud provider.
The remaining piece of the puzzle is creating systemd .service files, they comprise the instructions to the server on how to run, stop, restart, and initialize services. Each service is very similar, they each pull their docker image, and run a container with the appropriate command line incantation.
Due to the docker containers having required links, we will create services with the same dependencies. One to run each of redis, the app, and nginx.
The service files are available on github, we will just show one service file in full.
The Requires and After statements are both required. Because we are launching docker containers we rely on the docker.service.

Note directives with =- are allowed to fail, this is useful because docker complains when trying to rm containers that don’t yet exist.
These service files have to be both enabled and started before systemd will know to run the docker containers at boot. To do this we have to copy the service files to /etc/systemd/system/.

If you use a quay.io account, just add these ExecStartPre commands to login to quay.io. Robot accounts are a good idea here too!

You can use journalctl to get the logs that systemd collects, or as these are just normal Docker containers running on a single host we can use docker logs. Consider mounting a logging directory from the host machine to collect logs outside of docker.

I usually have another couple of layers in front of nginx which I’ll briefly mention:


How do you deploy?

We have explored a couple of powerful tools for deploying web applications to a single server so you end up with a reliable running application. Automated deployment is a big issue that I’ve not mentioned, a great start is to have a continuous delivery pipeline that tests code and then builds and uploads new docker containers. A sidekick service can be written that will update the server too. As you’d expect with additional servers you can dramatically increase the reliability, but if anyone else has different ideas for single server deployment please share them with me by commenting or mentioning me on twitter @thorneynz.