April 07, 2015
I’ve been branching out doing some 3D modelling at work recently and wanted to share the rendering pipeline I settled on. I began on my laptop Dell XPS 15 (XPS15-6846sLV), GPU rendering worked straight away from Windows 7, but took some setting up with Archlinux. This setup was pretty good for modeling, but I quickly realized that I needed some more serious heat dissipation for rendering. I then moved to my workstation which has much more CPU power and a dedicated NVS 310 graphics card, not too shabby but sample renders were taking too long. I borrowed a work colleague's GeForce GTX TITAN with 12GB GDDR5 ram - unsurprisingly this beast sped things up considerably.

I still had to render more frames than would make sense on one machine - especially in the time I had to work with; so I set up Blender on Amazon Web Services to take advantage of the EC2 instances with GPUs (g2.2xlarge). Taking advantage of favourable spot prices in North Virginia one can run GPU instances for between 5 and 10 cents per hour. In the EC2 Management console there is a section Limits where you may need to put in a request to be allowed more than 5 g2.2xlarge instances. Amazon came back with an approval the same day for me.

Getting Blender to render remotely from the command line with the GPU took some fiddling so I've created a public AMI which I hope will save some hassles.

I've had small jobs of between 5 and 20 machines running at once for up to 48 hours. I couldn't think of an easier way to get short term access to 20 high end machines with $2000 graphics cards in them!

To get started with an AWS Blender render farm, follow the excellent instructions on the Brenda documentation but substitute the AMI with my image which has CUDA enabled and Blender 2.74 installed:

You can happily launch a spot machine, SSH in and render from the command line.
E.g. to run the BMW27 benchmark:
Note if you don’t include -P /opt/cuda_setup.py it will still run but will use the CPU instead of GPU.

Use a frame-template with the addition -P /opt/cuda\_setup.py:
Tip run nvidia-smi to see GPU utilization during rendering.
Note the AMI is based on StarCluster which uses Ubuntu 12.04 as the underlying operating system. Blender 2.73 is also present under /opt/blender-2.73. 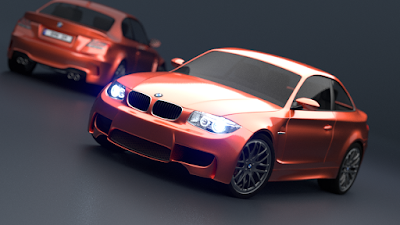