When creating responsive websites there are so many options to choose from. I've come to favour AngularJS and want to take the time to walk through creating a non trivial, useful tool.

Standing on the Shoulders of Giants

Using a seed app gives a well designed and extendible structure. Start by downloading the angular-seed app from github.

Extract the into your project folder and start your web server. The server itself is not the concern of this post, django, nodejs or python's built in http server will work fine to serve the content.

If everything has gone well you should be able to aim your web browser at localhost:8000 and sees something very exciting like: 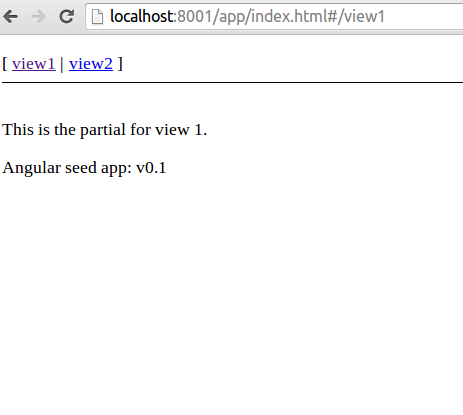 Lets take a quick digression to look at where all the files are:

Now say we want to change these two views to create a user interface for placing and configuring sensors. The application is a single page app, so the app/index.html file is the all important first step. Add some extra html semantics by adding headers and footers.

The stylesheet in app/css/app.css is the appropriate place to be making any design changes. At this point I usually add bootstrap, AngularUI, and D3.js to app/lib/bootstrap and include them appropriately from index.html.

Taking in the view

Each independant view has two components:

The partial simply contains the view's html. The caveat which we will explore soon is that we can use non standard tags. The controller is somewhat analogous to the model in the MVC paradigm.

One directive that AngularJS provides is ng-repeat. This allows items to be taken from an iterable from the controller. I will cover in the next section how the sensors are defined. Assuming the controller will provide this we can write html to create a new div for each sensor with the following:

This will create as many div elements as there are elements in the sensors array. The name attribute of each sensor will be included in an h4 tag in the contents of each div along with an index number.

So enough beating around the bush, how do we use the controller? Open up app/js/controllers.js and change:

This tells angular that our controller is going to have a $scope object - essentially a private namespace that defines the interface between the partial and the controller.

Returning to our partial1.html file we need to add some way to modify the sensor information. Say our sensors have a direction in which they are pointing, and a beam width. Adding input elements bound to particular sensors' data is straight forward using the ng-model directive:

This provides two methods of changing the angle attribute of a sensor. Just add similar things for say the sensors' beamWidth and we have the beginnings of a configuration interface.

This is all that is needed to bind the front end to the controller, as the slider is moved the integer number of degrees changes, and if you type in a new angle the slider jumps to the correct place instantly. Additionally if the value is changed from the controller the value immediately updates on the screen.

Wait a second. It doesn't work!

Yes, I was a bit sneaky and put the word integer at the end of our input elements. This is because I want to enforce the use of only integer numbers as sensor angles. The way we do this is with a custom directive; just like the non standard html ng-repeat we can introduce our own html attribute!

So open up app/js/directives.js and replace the appVersion directive with this:

In a nutshell this will call parseInt on any new values before updating the model associated with the element that has this integer directive. How cool is that?!

Time to get a touch more interesting, say we want to graphically represent our sensors - while we are still changing them... Add the markup to our partial:

We have added a beam element with normal enough looking attributes for size and color, no problem understanding those. The angle and beam-width attributes have angular template expressions which are obviously going to have to be evaluated continuously... somehow.

This directive is explicitly only for Elements, and can't be added as an attribute like integer was. The template is what html replaces the custom element. So as it stands a div block would be found in the DOM instead of a beam (after AngularJS has worked its magic).

The scope is where we can add the attributes and specify whether they will be bi-directionally bound. In this instance angle and beamWidth are locally bound to the DOM element in a one way update. If it changes in the parent that change can be observed by the directive, although the data is always a string. The size and color attributes are directly bound bi-directionally - similar to ng-model.

The last piece of the puzzle is the link function. It is passed a private scope, the instance element, the instance attributes, and a controller which isn't used in this example.

So to get the size and color for a particular beam we can access the instance attributes:

To get the div block that AngularJS has switched with the beam block we access the instance element:

This tutorial is already fairly complex so I'll skip giving a detailed description of actually drawing the svg with d3.

To watch the angle and beamWidth attributes we call $observe on their respective instance attributes:

Then within the updateGraph function (which we define in the link function) we simply use $scope.angle and $scope.beamWidth. 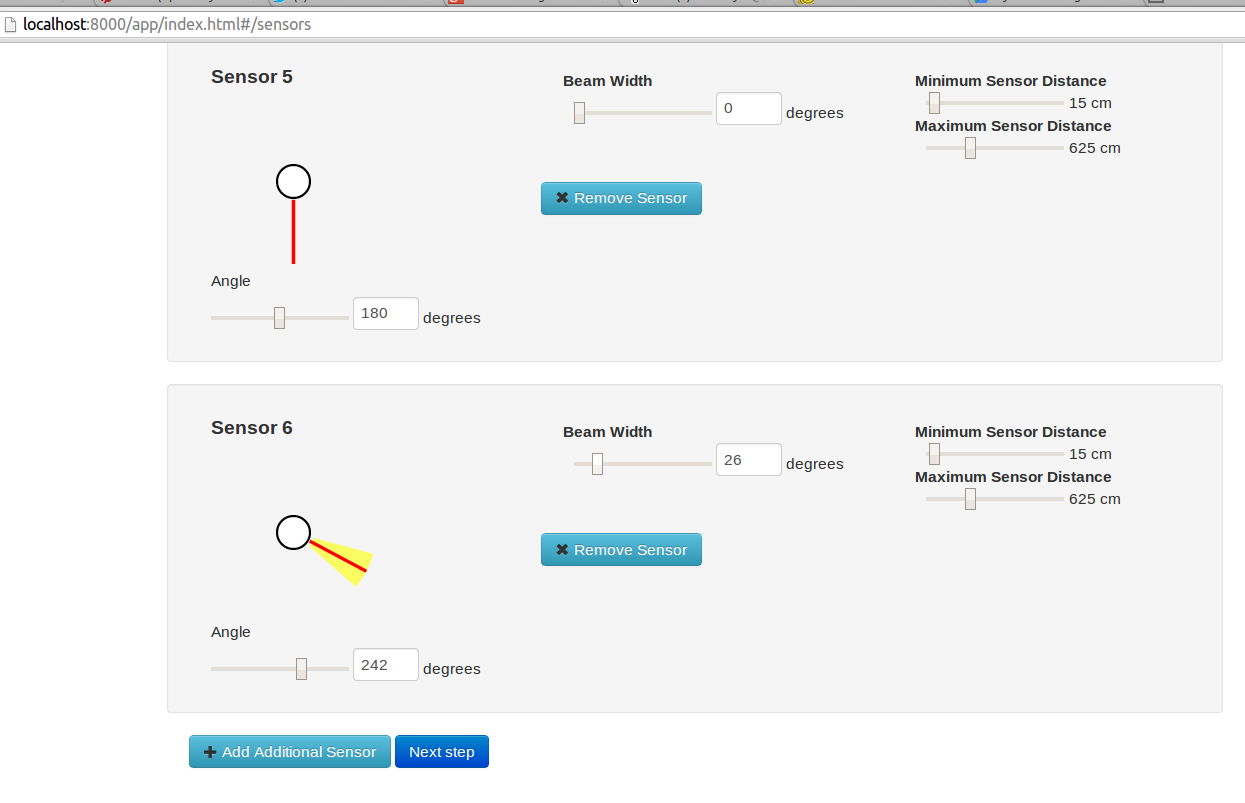 As you can see I've also added a couple of extra buttons.

Adding another view and controller is relatively straight forward, just add the content to the html file and the logic into the controller. If we wanted to share state between controllers we can use a $rootScope namespace as well (or instead) of a $scope namespace.

Say we wanted to show some more configurable information beside each sensor we could make a table and reuse our beam directive.

So this is all good and well but we have our data hard coded in the sensors javascript array, by leveraging AngularJS's http module we can easily make a request for the initial data:

This can be triggered by a button which could take the filename from a form:

Note that ng-hide and ng-show can be used to conditionally display blocks.