Following on from a hardware challenge sent out at work last month, I posed a Software Engineering focused problem.

As a successful global company, we have many customers around the world. While marketing are gallivanting around, visiting customers, it might be handy to have a program that tells them which of our customers are closest based upon which customer they are currently visiting. Being an engineer who is interested in writing software that is useful to everyone, you decide to write a general solution to the quandary. Each of our customers lives at a unique location. For the purposes of this program, the world is flat, and the latitude and longitude are for all intents and purposes Cartesian coordinates on a flat plane. For example, in our flat world, lat 45, long -179 is not as close to lat 45, long 179 when compared to lat 45, long 170.

The task was to write a program that takes a single argument on the command line. This argument is a file name which contains the input data. The program should output the nearest three other points for each customer in the list. Note at least one test will require having to deal with all of our (virtual) customers.

Final timing will be carried out on my 64bit ubuntu machine which has support for the following languages/compilers:
More esoteric environments may be added if you really want. If the program failed to terminate in five minutes for any single verification test, or if the program fails to compile, or terminates early I discarded that program as an incorrect entry and sent an email with the reason.

Many people made very successful brute force implementations. Some used squared distances for comparison to avoid computing square roots. Around 1kB of source was enough for bruteforce solutions in lua and python. Smallest was around 40 lines of Python code.

For really small N, brute force was quicker than the "smarter solutions". But there was still quite a spread in the max N each solution could solve: 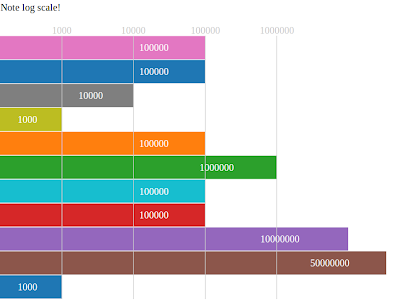 These are the data structures I was expecting, I created one in pure python that was reasonable but couldn't compete with the compiled solutions over a certain input size. One engineer submitted a Python + Scipy solution that simply imported scipy.spatial. This was reasonably fast, and very easy! The same engineer also wrote a brute force solver in cython that was much faster for the smaller tests.

The winning solution was a bit of a new take on a quadtree - with nine children instead of four and splitting occurred at 40. It easily solved fifty million customers in around two minutes. When all my resources were dedicated it could often solve one hundred million as well. I had a few occasions where my system locked up at that size though! 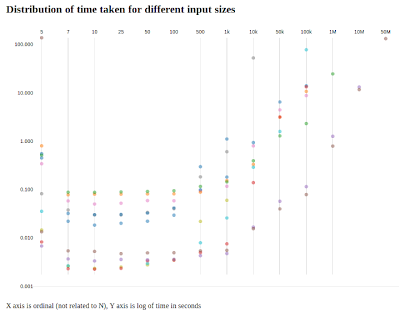 A single bitcoin was the main prize, although finding one has proven tricky! I thought it was a fun challenge, and I look forward to the next one!