August 13, 2009
So I thought I would try out the pycam module on windows.
First of all it seems windows comes with nothing, not even python. So after installing python I still needed this: http://videocapture.sourceforge.net/
and this: http://pygame.org/ftp/pygame-1.9.1.win32-py2.5.msi
Vid cap itself is so easy:
To get just the most basic stuff going, for some reason the VidCap module wouldn't let me open a camera unless the size was set at (160, 120) and the Camera class seemed to change going to windows... anyhow if you want to play with this grab it from the repo here. 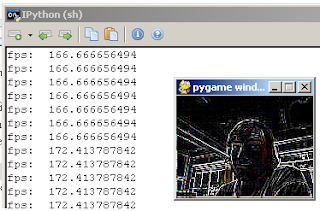 This is using the pygame edge detect, just tried the scipy one - appears to be a problem mapping surface to numpy array... from memory there was a hack to get around something so maybe thats no longer required. 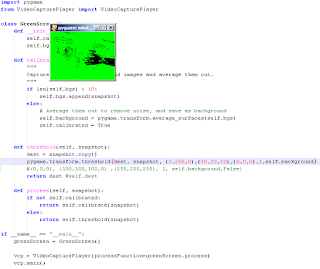 The "greenscreen" example and the simple threshold.

Couldn't immediatly see how to get the python wrappings for swig going on windows, and all the face detection stuff won't work untill they are installed correctly. I did rebuild opencv in visual studio and all the C examples work fine, Windows and Python don't seem to get along that well. Anyhow I don't plan on looking into it in a hurry. Do people actually still use windows? (Why?)